Why Fat is Important for Performance Horses 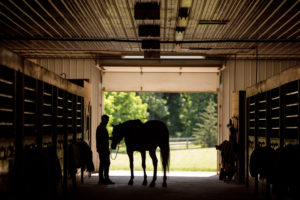 Fat is important for performance horses. The use of fat in the equine diet has a long history.  A very old book, Horse Secrets by A.S. Alexander, published in 1913, points out that horse traders knew back then that adding fat to the diet was beneficial for gaining weight and improving hair coat.  They may not have known why it worked, but they knew that it worked!

Horse Feed With High Fat Content – The Evolving Role of Fat: The Omega-6 and Omega-3 Ratio

Corn oil was an early oil source as it was available and palatable.  Flax seed also provided both fat and protein. Boil the flax seed . Boiling both softened the husk and eliminated anti-nutritional factors.

The use of vegetable oil as an energy source has become standard in horse feeds.  Animal fat sources, while used in early research, have pretty much been eliminated from use in horse feeds. This being primarily due to palatability and perception issues.

From an energy standpoint, all of the common vegetable oils are very similar.  More recently, considering the essential fatty acid content, particularly the Omega-6 and Omega-3 levels, has become important in selecting the oil source.  As with many things, balance along with quantity is important.

Horses are accustomed to the limited amount of fat (3-5%) found in forages. Particularly fresh pasture, which is high in Omega-3 fatty acids, whereas oils from grains and seeds tend to be higher in Omega-6 fatty acids.

Scientists have not yet pinpointed the ideal total dietary intake or ratio of Omega-6 and Omega-3 fatty acids for horses.  Multi-species work has indicated that a ratio someplace between 2:1 and 10:1 is an acceptable Omega-6: Omega-3 ratio in a total diet.  This considers the higher Omega-3 content of forages and the higher Omega-6 content of grains and some vegetable oils

Dietary supplementation with Omega-3 fatty acid sources provide numerous benefits to horses and other animals including:

Better sources of Omega-3 areFlax seed, flax oil, soy oil and fish oil (limited use due to palatability).  Chia seed and oil may also be a useful source and other sources are becoming available.

Fat present in forages is balanced: by feeds and supplements containing added oil. Which, subsequently, deliver balanced Omega-6 and Omega-3 levels in the total diet.

Here at Solon Feed Mill, we are happy to lend our knowledge to maintain the perfect diet for your horses.